Ottoman history from 1566 -1792 has been described as ”The Decline of Faith and State.” To Ottomans, ” decline ” meant dislocation of the traditional order; hence, ” reforms ” to check or reverse ” decline ” meant restoring the old order which had produced the Golden Age of Suleyman the Magnificent.” At times decline was checked but only temporarily. Decline was not only slow, gradual, interrupted, lasting rnore than three centuries, but also it was relative only to its own Golden Age and to the remarkable progress of its Christian European neighbors.

It is easier to describe decline than to explain it. Some developments which the Ottoman Empire did not take part in gave Europe its relative superiority.

[ 1 ] Its 16th-10th c. commercial expansion overseas enriched Western Europe to the detriment of the Ottomans.

[ 2 ] The West improved agricultural methods while technology and industry advanced rapidly, all tied to the new scientific experimentation and rationalist attitudes stemming from the Renaissance and Reformation and culminating in the Enlightenment; only weak echoes of these events reached the East before 1800.

[ 4 ] A prosperous,enterprising bourgeoisie on the Western model failed to appear in the Ottoman Empire to back up the ruler; the wealthy bourgeoisie which did exist was small and composed largely of either non-Muslim merchants and bankers, who were not acceptable as the sultan’s allies, or bureaucrats, who were a part of the “establishment ” anxious to protect their own interests and often resisting change.

The Ottomans were more conscious of the dislocations in their own traditional system: 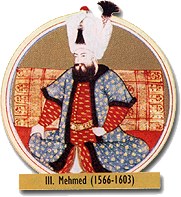 [ 1 ] Leadership : 17 sultans after Suleyman ( from1566 to 1789) were, with few exceptions, men of little ability, training, or experience, and some were incompetent, even mentally defective; their average rule of 13 years was less than half that of the first 10 sultans. This was no accident! Mehmed III died in 1605 leaving two minor sons as the only direct male survivors. The elder, Ahmet I, spared the life of his brother, Mustafa, but kept him secluded in a special apartment in the harem of Topkapi Palace. The Sitva Torok treaty with Austria (1606) should have been a wake-up call for the Ottomans. It was a negotiated compromise rather than a grant of peace dictated by the sultan; in it, the Hapsburg monarch finally was recognized as the sultan’s peer, as ” Emperor” (Padishah rather than simply King of Vienna.” Mustafa I’s accession in 1617 marked the end of ”succession by military contest and the practice of royal ” fratricide,” replaced by confinement of princes in the palace and succession by the eldest male of the imperial family. Not only were most inexperienced and incompetent, many were minors under the influence of the Queen Mother (Valide Sultan) and harem favorites, giving rise to palace cliques and intrigue. For several decades in the first half of the17.th century, women of the palace exercised such influence that the period is called ” The Sultanate of the Women “

[ 2 ] Bribery, purchase of office, favoritism, nepotism : Promotion by merit, long the hallmark of Ottoman administration, became less common. Corruption spread to the provinces where an official would buy his office, then squeeze more taxes from the populace to reimburse himself. There were frequent shifts in judicial as well as civil officials, with justice also sometimes for sale. In the mid-to-late 17th c., the great Koprulu family of viziers attempted to root out corruption and improve administrative and military efficiency. They were temporarily successful in arresting ” decline ” through traditional reforms, and in 1663 Ottoman forces besieged Vienna for the second time. But in the 17th c., the Ottomans were confronted by an extended arc of opponents, Venice, Austria, Poland, Russia, and Iran, often obliged to confront several at once. In 1699, after defeat by a coalition of all Central and East European powers, the Ottomans accepted mediation, negotiated peace, and, by the Treaty of Karlowitz, for the first time gave up territories in the Balkans. The shrinking of Ottoman frontiers had begun.

[ 3 ] Military  : The devshirme was abandoned ( just when is uncertain ); sons of janissaries were admitted to the corps, then other Muslims; and imperial slavery became a legal fiction.” Provincial janissaries sometimes acted as semi-autonomous local rulers, while in Istanbul they become a disruptive force, often in collaboration  with artisans / craftsmen and students. The provincial cavalry army was made obsolete by musket-armed European troops, requiring the Ottomans to increase their standing infantry and equip them with firearms. This required money. The military fief system was all but abandoned and replaced by tax-farming. The heavy tax burden was responsible in part for revolts in Anatolia, abandonment of farm lands, and depopulation of villages; thus the empire experienced a decline in tax revenues despite higher taxes.

[ 4 ] Economics  : The Ottoman Empire suffered from severe inflation, as did all of Europe, as New World silver flooded in. This, together with debased coinage, fueled corruption. By the 17th c., Europeans and consolidated their control of new sea trade routes, by-passing the Middle East and diminishing the transit trade through Ottoman lands. Asian spices were shipped directly to Europe, and wars with Iran interrupted the silk trade. European manufactured goods flowed in, undercutting local handicraft products and enriching Levantine merchants. The Ottoman Empire’s unfavorable trade balance resulted in an outflow of gold, while European states demanded more favorable trade treaties ( ”Capitulations” ) and were guilty of blatantly abusing them.

[ 5 ] Intellectual decline–Selim and Suleyman’s 16th c. victory over Safavid Shi’ism so consolidated Sunni orthodoxy that Muslims in the Empire were not forced to engage in intellectually challenging and stimulating conflict as Catholics and Protestants were in Europe. Muslim scholars became intellectually conservative and resistant to new ideas; convinced of the superiority of Muslim / Ottoman civilization, they were seemingly oblivious to the advances being made in the infidel West. Meanwhile, the Ottoman religious establishment gradually became infiltrated by the Sufi orders, producing a new sort of symbiosis which gave greater strength to conservative religious” elements.

In the18th c. more wars and losses resulted in another attempt at reforms. The Tulip Period  ( 1718-30 )   marks the first conscious borrowing of European culture and art. During the mid-century interlude of peace on the European frontiers, Ottoman political authority was further diffused. Provincial notables and governors barely heeded orders from Istanbul. Levantines and Phanariot Greeks enjoyed enormous prosperity and influence. The Muslim religious elite reached the apex of their power. In the last quarter of the century, Catherine the Great resumed Russian expansion southward; her ” Greek Scheme ” aimed to put her grandson, Constantine, on the throne of a neo-Byzantine Empire with its capital at Constantinople. Her first war ended in the Treaty of Kuchuk Kaynarca (1774) by which the Ottomans gave up the Crimea, the first time they had lost territory inhabited primarily by Muslims. In 1789, during the second war with Catherine, Selim lll became sultan and initiated a reform program called the New Order, (Nizam-i Cedid) with emphasis on military and fiscal reform. But Selim’s failure to prevent Napoleon’s invasion of the rich Ottoman province of Egypt in 1798 revealed to Europeans as never before that the balance of power had now shifted decidedly in their favor.

The Imperial reforms begun by Selim III were taken up again in the early decades of the 19th.c. by Sultan Mahmud II. They aimed at curbing provincial autonomy and achieving political centralization and modernization through Western-style military, administrative, and fiscal reforms. But European intervention in the Greek struggle for independence signaled the beginning of the modern ” Eastern Question ” (Simply put : Who would divide the spoils when the Ottoman Empire collapsed ? ). To counter this, the Tanzimat period (1839-76) saw reforms center around a new concept of justice (adalet): equality before the law for all Ottoman subjects, Muslim and non- Muslim alike. This concept was fundamental to the prevalent ideology of the Tanzimat, Ottomanism ( patriotism but not yet nationalism). In the 1850s-60s, intellectuals known as the New Ottomans” engaged in a liberal critique of Tanzimat policies with emphasis on fatherland (vatan), freedom (hurriget), and constitutionalism. The Tanzimat reforms culminated in the constitution and parliament of 1876, but the 1877-78 war with Russia and the Treaty of Berlin, by which most of the Ottoman lands in Europe were lost and the European powers laid claim to spheres of influence in the Middle East, allowed Sultan Abdulhamid II to bring an end to ” liberalism” and proceed with reforms under an autocratic- regime. By the 1880s Germany under Kaiser Wilhelrn had replaced France and Great Britain as friend and military advisor of the Ottoman Empire, and new ideologies were challenging Ottomanism. Abdulhamid embraced Pan-Islamism; his opponents, known collectively as Young Turks, were drawn to a secular Ottoman pseudo-nationalism and some to Pan-Turkism.

The Hamidian despotism was ended by the Young Turk Revolution(1908-09) and replaced by constitutional, parliamentary government under the Young Turk Committee of Union and Progress. Their policies reflected a growing sense of Turkish nationalism. But in the five years preceding World War I, two Balkan wars and a war with Italy, which had invaded Libya, brought the military element of the Young Turk movement to the fore and resulted in the domination of the Istanbul political scene by the Young Turk Triumverate ( Enver, Talat, and Jemal Pashas) . Under their leadership, the Ottomans entered World War I on the side of Germany. The victors dictated the peace to end all peace at Paris in 1919. With even the heartlands of the Empire partitioned and Istanbul occupied by the victorious allies, the Turks of Anatolia under the leadership of Mustafa Kemal (Ataturk) rejected the terms of the dictated Treaty of Sevres. Again they took up arms, fought successfully for their independence, and — bringing to an end the 600 + year-old Ottoman Empire –- negotiated the Treaty of Lausanne in 1923 which granted international recognition to the boundaries of the new Republic of Turkey

Assembled by Richard L. Chambers,
The University of Chicago