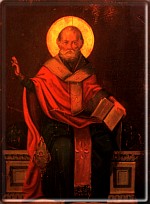 Demre, lying on the shore of the Mediterranean is a very important center of Christianity. There is a church here called the Church of St.Nicholas. Two conflicting suppositions are made of this St.Nicholas. The first of these is that this St.Nicholas was the actual founder of the Russian Empire. The second supposition and one believed by many westerners is that this St. Nicholas is the saint known as Santa Claus. According to excavations this structure dates to the sixth century and consists of a basilica shaped building with naves divided by pillars and with the middle nave divided into three large square areas. Side naves are again divided into even small areas. In the eighth century the church known today was built over the remains of the earlier structure while benefiting from some of the materials and parts of the first. In 1862 the Russians hired a German architect to restore this building. In place of the traditional Byzantine dome, he roofed the structure with an altogether untypical ribbed arch. Recently, a new segment of the original structure was found under a layer of mud at the entry of the building; in niches of this room archaeologists discovered various decorated crypts. It is believed that one of these is the tomb of St.Nicholas, or Santa Claus. Some element of frescoes and round floor mosaic were also discovered on the walls of the church during the course of excavation. Another center of Byzantine culture in this region was Ksantos near present-day Fethiye. Among the ruins of this then highly-populated area are ruins of a church. There is also the ruin of a large monastery at the site of the town’s ancient Roman acropolis. The sacred site of Letoon lies on the further banks of the Ksantos River and a few miles inland from the sea.

Archaeologists have also uncovered the remains of another Byzantine city in Kumlucu, to the east of Finike. Illegal excavations made here by local villagers have resulted in the foreign abduction of many artifacts. The artifacts (primarily items from a church treasury) that were found by archaeologists are on exhibit at the Antalya Museum. A basilica which was built over the remains of antique ruins can be found in present day Antalya, the ancient city of Pamphilia. It is believed that this church was built in the name of Mary; this structure was converted into a mosque and has been known as the Kesik Minare, the Korkud Camii, and the Cuma Camii. Although the ruin is unroofed today, it is believed that the middle nave was covered with a tower-like dome.

The remains of two large basilicas can also be found in the site of the ancient city of Perge, today known as Aksu. One of these basilicas is 75 meters long, including its atrium, and each of its naves were divided by a row of eleven columns. The second basilica is important for its very large size, as it is thirty meters wide and fifty meters long, excluding its atrium. The basilica at Perge is strongly reminiscent of the architectural style of southern Anatolia.

It is known that in the fifth century a large basilica was built directly in front of the temples of Athena and Apollo in Side, lying to the East of Antalya. The church was destroyed in the Arab invasion of the seventh or eighth century, and the local people demolished it completely in the ten or eleventh century and built a small, four-columned church over the middle nave of the original structure. A small domed Byzantine church which was built in the clover plan is situated at the upper end of the Alanya Tower. Scientists believe that this structure was probably built over the remains of a magnificent basilica which preceded it. The interior of the small church contains faded frescoes and stones and bricks constructed in various styles. This Byzantine church was later given the name of the Arab Saint and it is thus known today.

There are many other Byzantine ruins to be found in small settlement areas of this region. There is a quite interesting basilica in present-day Uzuncaburc towards the north of Silifke; this was once the site of the important Roman city of Diokaisareia. This basilica was constructed in the Byzantine period by tearing down a temple dating to the very early periods. The Alacahan Monastery is found on a terrace dug out of the rocks of a mountain near the ancient city of Claudiopolis; today’s Mut which lies along the Karaman-Silifke road. This complex consists of graves cut out of the rock in rows, a cave-chapel, a basilica dedicated to the four apostles who wrote the gospels, a baptistery and a very large church. All of these structures are interjoined by a ceremonious path. The traveler Evliya Celebi visited this site in 1671 and when he noticed the workmanship of the stone masonry, he wrote that ” this is a masterpiece which has just left the architects hand.”

To the east of Silifke are two large gorges. The largest of these was called korikos during the antiquity and a Temple of Zeus was erected in it. The Byzantines then converted this structure to a basilica. A small church was built at the very bottom of this gorge and dedicated to the Virgin Mary, as she had reputedly given birth to Jesus in a cave. There are also the remains of a bath found on the coast that dates to the fourth century. The floor of the bath is decorated with a painting portraying the nude, Three Beauties. These three beauties are known as the daughters of Zeus-Aglaia, Eruphrosyna, and Thalia