The most important Byzantine architecture found in Istanbul consists of churches. The most magnificent of all of the Byzantine churches is the Hagia Sophia. This church was designed by the architects Anthemios of Tralles and Izidorus of Miletus. This construction of the second Hagia Sophia was started in 532 by the order of the Emperor Justinian and was built over the ruins of an earlier structure. Materials were brought from Ephesus, Athens, Rome, and Delphi and were used in the construction of this magnificent building. The church was opened for worship five years later, in 537. The Hagia Sophia has a diameter of 31-33 meters and a height of 54 meters and is covered with a large dome. The church was considerably damaged by the earthquake of 557 and the nephew of the Architect Izidorus supervised the repair of the structure. 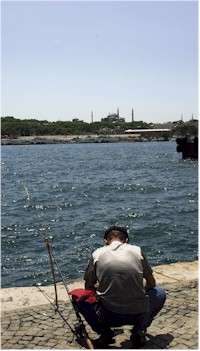 Because Byzantium was strongly under the influence of Rome at the time of the construction of the Hagia Sophia, this structure is an amalgam of the magnificence of Roman architecture with the standard church architecture of the Byzantines. The original mosaics of the church were severely damaged by the Iconoclasts, but new mosaics replaced the former in the 9th century after the period of Iconoclasm had disappeared.

Besides the religious subjects of the mosaics used to decorate the interior surfaces, the emperor was also used as a subject. One mosaic depicts the Virgin Mary with the emperors Justinian and Constantine sitting at her sides. Another mosaic shows Jesus sitting on a throne with the Emperor Leon 7 kneeling before him. Another mosaic is of Mary and John the Baptist imploring Jesus for mercy in the name of the people. All these mosaics bear traces of Hellenistic influences. There are also several mosaic “portraits” of other members of the imperial family. Portrait art was very advanced during the Byzantine period. After Fatih captured the city this structure was used for worship by the Moslems. In 1934 Ataturk ordered that the structure be used as a museum.

Deciphering the “Eighth Wonder of the World” 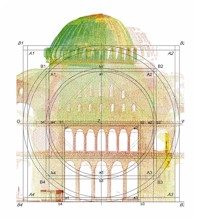 Almost one and a half thousand years after its construction in the center of ancient Constantinople, Saint Sophia* has divulged the secret of its design principle. Volker Hoffmann, professor at the Institute for Art History at the University of Bern, deciphered this using state-of-the-art HDS laser technology from Leica Geosystems. Some of the first laser evaluations went on show for the first time in mid July 2004 in Istanbul at the Congress of the International Society for Photogrammetry and Remote Sensing (ISPRS) and attracted numerous visitors. In mid-October, the Leica HDS3000 was used to record the floors of this building. The handheld laser meter Leica DISTO™ also played an important role at an early stage of the research project. 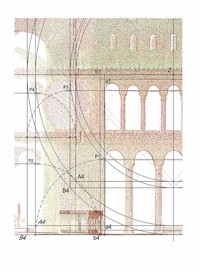 Floating with apparent weightlessness over the main room is the vast dome of the Cathedral of Saint Sophia. Commissioned by Emperor Justinian during the late antiquity period, this UNESCO World Cultural Heritage site is regarded as the eighth wonder of the world. According to the plans drafted by the mathematician Anthemios von Tralles and the architect and structural engineer Isidoros von Milet, the “Aya Sofya”, which is now open to the public as a museum, was built in six years during 532 and 537 AD. However, the original plans of this building have been lost without a trace. For hundreds of years, experts have tried to fathom just how the scientists and artists working in the 6th century managed to construct a freely suspended dome measuring almost 56 meters high and 31 meters wide, supported only by four pillars. Considering the technical equipment available at the time of its construction, many experts still regard this building even to this day as one of the boldest feats of construction ever to have been achieved by the human hand.

The “impossible task” of determining the dimensions

“The key experience on entering the main room through the emperor’s gate, which immediately presents itself in full view exposing its full width and height up to the vertex of the huge dome, is the impossible task of finding a clear relationship to the proportions and an accurate calculation of the dimensions“ writes the Marco Polo travel guide. This phenomenon, which was intended by its architects, is produced by the spatial structure, the apparent weightlessness of the dome, and the bewildering abundance of direct and indirect lighting effects. Thanks to the work of the Bernese art historians, insights into these dimensions and their consistent application by the architects and builders of the day are now available.

Volker Hoffmann working together with his employee Nikolaos Theocharis in a research project sponsored by the Swiss National Fund found that the entire design of Saint Sophia is based on an analemma. This is a projection technique that was described by Ptolemaeus. This technique made it possible to interconnect the earth and the canopy of heaven in accordance with the view of the world at the time: the sphere representing the sky, god and the church, and the cube representing the earth with its four directions, above and below, and the Emperors real. For Saint Sophia, according to Volker Hoffmann’s findings, Anthemios and Isidoros devised an overlapping double-square analemma as a uniform design shape for the ground plan and the elevation of the cathedral, penetrating each other three-dimensionally in the form of a cube and sphere. After performing 3-D laser measurements with the aid of a HDS™ Leica 3000 laser scanner at Saint Sophia, the two scientists from the University of Bern used the technique known as reverse engineering to decipher a “master plan” generated some 1470 years ago. It is based on a ratio of 1 to 1.06 of the small square to the large square. On the basis of the investigations they have performed to date, the researchers have arrived at the conclusion that “there are no layout-related points or lines in Saint Sophia that cannot be deduced from this master plan using geometric logic.” The Leica Disto also played an important role. In Volker Hoffmann’s words: “Thanks to this compact and highly practical laser measuring instrument, we were able for the first time to determine the precise distances of the four supporting pillars at the simple press of a button. This was highly important at the start of our work for the calculation of the dimensions of the double circle/double square.”

This design and building principle described by Volker Hoffmann as the “master plan” of Saint Sophia is truly ingenious. “Putting it simply, the master plan was marked out with pegs and strings on the building site, meaning that the builder then only had to measure in the double square, which in turn allowed him to transfer across very precisely all the other points (pegs) and lines (strings and/or lines of bearing) of the Saint Sophia architectural elements”, says the professor for architectural history and preservation of historical monuments from the University of Bern. In the second half of April 2005, following the completion of the laser evaluations and after consulting the museums director Mustafa Akkaya, results of this research work are to be presented in the form of an exhibition for the 14 million inhabitants of Istanbul and for the scores of visitors that flock to Saint Sophia. The two thousand-odd photogrammetry and remote sensing experts who travelled to the ISPRS Congress in July 2004 have already gained an insight into this in Istanbul at the Leica Geosystems exhibition stand. The final results are to be presented also in exhibitions in Berlin and Bern. Exhibition sites in the US and in France are also foreseen.

Until now, no one had uncovered the secret of the design principle used in this building, which is devoted to Holy Wisdom, Saint Sophia –at least not until Volker Hoffmann, together with his employee Nikolaos Theocharis, finally succeeded in deciphering it using state-of-the-art 3-D laser measurement techniques some 1470 years later. With is long history as the principal imperial church of early-Christian Greek Orthodoxy, as a mosque, and now as a museum, Saint Sophia represents the history of the Occident and the Orient as no other building can.

Comments by: W P Mallow
Your site uses “Saint Sophia” The name is “Hagia Sophia” which is Greek for “Holy Wisdom”. Justinian would NOT have named “his church” after a woman.