The Bronze period begins around 3000 in Anatolia, around 2500 in the Aegean and Crete, around 2000 in Europe. Bronze is obtained by mixing copper and tin ( % 90 copper, % 10 tin). In this period apart from bronze tools other kinds such as copper, gold and electron, which is an alloy of natural gold and silver are also produced for using in religious ceremonies. The people in this period lived in cities surrounded with fortification walls. Houses are built in rectangular shapes on stone foundations with sundried brick walls and. Agriculture, animal husbandry, merchandise and mine production are the means of life. 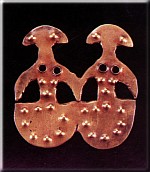 Alacahoyuk, 67 km to Yozgat city and 3 hours away from Ankara is the most advanced settlement area in Anatolia from this period. The rich graves discovered here are in shapes of regular stone rooms. The dead is put in the center of these rooms with gifts, in a posture that the knees are pulled up to the belly ( hocker position). Sacrificed and presented during the ceremony, bull heads and feet are left on top of the roofs. Goats and sheep are also sacrificed. They might have been served to the attendants at the funeral. The graves are thought to be used for many generations. Most of the gifts are composed of gold, silver, electron, bronze objects and decorative items such as diadems, necklaces, hairpins, bracelets, earrings made of precious stones like amber, rock crystal, etc. Bronze and gold weapons, sun discs, deer and bull figurines, goddess statues of religious services are invaluable works of art discovered here. For the first time in this period do we find bronze spear heads in Anatolia. They resemble very much to their counterparts in Mesopotamia and Syria which is an interesting point.

Another important place in the bronze age is Troy, Level 1. dated back to 2900-2500 BC. This first city in Troy, now partly unearthed is wrapped up with a 90 meter wall. Houses are in megaron type again and the entrances are from the narrow sides. Walls are stone and set in the herring bone pattern. Troy, Level 2. is dated back to 2500-2000 BC. It is built on top of Troy Level 1. The inhabitants of this level come from the Aegean and Balkans like those of the first level. It is also surrounded with walls but this time they are 20 meters longer. The expedition team uncovered a royal residence that belongs to a king on one of the hilltops. Heinrich Schlieman, the German businessman who dug the Trojan mound in 1870, discovered a treasury at this level of Troy 2. Knowing Homer’s Iliad by heart, he was in search of King Priamos’s treasury and for years he believed the treasury he had discovered at the site was so. In the last years of his life, however, he was going to learn that the treasury actually belonged to a different level, the level 2, thus, to a different time period.

The information about the Hatti civilization comes to us through the Accadian sources   (2350-2150 BC). The Hattis are believed to be the one of the indigenous peoples in Anatolia. They lived around 2500 BC in city kingdoms and small tribes and by 2000 BC all of them were taken under the rule of the Hittites. Different from other cultures though,The Hatti art gives us the examples of a human-shaped pottery type (anthropomorphic) rather than an animal shape or a hybrid form. They worshipped such statues and figurines, and each one of them carried his or her name. The Hittites, an Indo-European tribe that came to Anatolia over the Caucasus around 2000 BC, were influenced by the Hatti culture in religion, mythology and literature. Not only did they take the names of mountains, rivers and towns from them; Hittites preserved even the original Hatti name of the country they lived in as “the land of Hatti”. It would not be an exaggeration to say that the Hittites formed one of the most interesting and authentic civilizations of the world history with the help of a rich cultural background they inherited from the Hattis over 250 years.

The peaceful times in Anatolia that lasted for thousands of years came to an end with a fierce attack around 2000 BC. There is only the remains of a thick fire layer dating back to 2000 BC in the settlement areas of the central Anatolia such as Alacahoyuk.

The Assyrian merchants established trade colonies in central parts of Asia Minor in this period. Their aim was to sell and barter the goods they produced for timber, silver, copper and raw material from Anatolia. According to thousands of tablets discovered at Kultepe, the Assyrians had established independent trade colonies here named karum. The gold and silver were the two basic norms for trade, the former for the wholesale and the latter for the retail business.The method of trade was bartering. The donkey was the main transportation animal. This period marks a big interaction and cultural exchange between Anatolia and Mesopotamia. The Indo-European tribes that until then lived on the north of Europe, for an unknown reason, migrated towards south between 2250 and 2000 BC in to a vast area from the Indian to the Atlantic Ocean. During this migration, tribes like Germans, Latins ,Iranians, Cimmerians, Indians and Hellens moved to the areas and the countries around their present day locations. In the meantime some tribes, likeTrojans, Thracians, Phrigians and Hittites got in to Anatolia too.