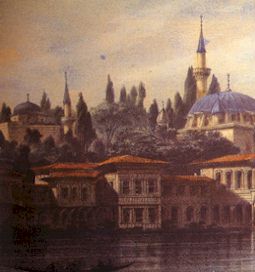 Istanbul, the cradle of various cultures, has always been a source of inspiration for Turkish and foreign artists where paintings reflect the captivating effect of this marvellous city on people who had the chance of admiring its beauties.

An interest developed for Istanbul where various cultures lived along the centuries at the end of l8th century in the West and increased towards the beginning of l9th century. It was also a result of the interest for the Eastern countries. Tourists visiting Istanbul, already had an idea about the city through the travel notes they had read and / or the engravings they had seen. The travelers and the artists who spent sometime in the city transferred their impression to the west by their writings and engravings and this information created an Eastern image in the western eye.

(1)
In fact the interest towards Istanbul started in very earlier periods. Thirteen albums of foreign origin describing Istanbul in the l6th century are in Europe and in the United States. Some of the travelers and artists who had various writings and paintings in their artworks are:

Russian Ayvazowsky of Armenian origin came to Istanbul first in 1845 and then twice more in the same period. He stayed in Istanbul two months in 1874 (Abdulaziz Period) and then visited Istanbul eight times and he painted a portrait of  Murat V ; in 1888 (Abdulhamit II period) he came to Istanbul for the last time and joined an expedition. 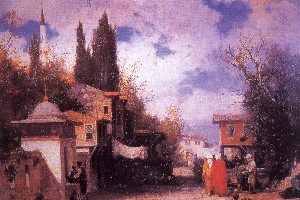 (2)
These observers were not always realistic in their impressions. The writers sometimes were influenced by the fairy tales of the East like “Thousand and One Night Stories”

(3)
The memories the Western travelers wrote down are quite important for the research studies   conducted about Ottoman History. Nicola lorga who comprehended it, makes clear in his work

(4)
That many times a traveler is preferred to a historian. No doubt, an impartial traveler’s descriptions might give extremely important clues. People who wrote travelers’ notes  used to describe the most  outstanding features of the place where they had first been.Besides various features it has,Istanbul was also a city of art, and equal to Rome, Venice, Amsterdam and even it was more outstanding from the point of  being “Picturesque”

(5)
Most of the artists  had to be left in private   collections since they were not important  enough to take a place in Western   museums.

(6)
Besides the important foreign artists, Ottoman artists also used Istanbul as a subject as well.

(7)
We find Istanbul siceneries also in miniatures which are the foundation of Turkish painting art, with Matrakci Nasuh, since 16th century.

(8)
“Surname dated 1582 was illustrated by Nakkas Osman. In this work of art showing the circumcision ceremony of Prince Mehmet, the son of Sultan Murat III, Sultanahmet Square, Ibrahim Pasha Palace, and various scenes of life in   Istanbul also take place.

(9)
Wall paintings seen in later centuries are also important for the depictions of Istanbul. It was natural to prefer non-figurative subjects   such as flowers, fruits and scenery for the painting coming out of the books   and taking places on the walls.This manner which was a result of public   belief strengthened the education of topography and technical drawing since the beginning of the 19th century.

(10)
In this period, since the understanding of western painting  was accepted a great deal, we see scenery depictions on wall paintings as well. This painting style which gave its first examples on Harem walls in Topkapi Palace and in Yozgat Capanoglu Mosque and in Soma Hizir Bey Mosque in Anatolia  carried on until the 20th century. 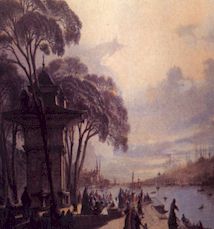 (11)
Scenery depictions in Anatolia can be considered in two groups.     1. Depiction of a specific locations.     2. Depiction of imaginary locations.
In the first group, we observe Mecca and Medina.

In the other examples which give the impression that they are the depictions of a specific location, we mostly see Istanbul. In Balkans, we know various imaginary depictions of Istanbul. We find quite interesting Istanbul sceneries in these depictions. These are quite common. In those examples, it is not possible to identify the location.

The sceneries do not  take place inside houses according to a specific rule. There is no rule in selecting the place and the subject.In an ordinary house, such as Bahaeddin Aga Mansion in Milas where there  was a simple daily life, a depiction of a harbor and a castle could take place on sofa walls or in a religious place such as the mihrap partition of Soma Hizir Bey Mosque, a large composition of still life with watermelon slices and other fruits were painted

(14)
No doubt, these are Istanbul artists,but they   generally chose palaces, parks, gardens and such places  and since they felt better in arreas surrounded by walls,they were not willing to work in crowded  public areas. It is difficult to say whether the reason was the desire of not being seen in public with painting materials in hand since it wasn’t tolerated to paint, or the preference of painting locations belonging to the Sultan so that they could gain his sympathy.

(15)
The habit of choosing such places continued until the artists of the “1914 generation”  who started to work in external areas.

(19)
Later on many important names  joined the adventure of  Istanbul  Artists. Sevket Dag with his mosques, Turgut Zaim with his examples from old Istanbul daily life and “Orta Oyunu”,Cemal Tollu and Cevat Dereli, the founders  of “Group D”, Bedri Rahmi Eyuboglu  who painted differend city sceneries  though he is from the Black Sea region and painted taverns where Fikret Mualla who had a tragic life and his friends Fikret Adil, Abidin Dino,Neyzen Tevfik and others went, Ercument Kalmik with his magnificent  harbor and boat paintings, and Cihat Burak with his lots of work about Istanbul, and many others  who we don’t mention here. 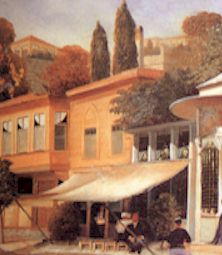