The history of the major religions is inextricably mixed with the history of Anatolia. Both have developed and advanced together. Early Paganistic ritual slowly gave way to Christianity, only to be replaced by the Islamic faith of the invading Selcuks. The legacy of this religious past is scattered throughout Anatolia, from the ruins of temples dedicated to Zeus and Athena to the Mevlana Tekkesi of Konya. Turkey is visited by thousands of religious pilgrims from all corners of the world every year, and they are all welcomed in the tradition of Celaleddin Rumi, who wrote:

Come, come again, come! Infidel, fire-worshipper, pagan,
Whoever you are, however often you have sinned, Come!
Our gates are not the gates of hopelessness.
Whatever your condition, Come!

The First Christians
Anatolia, often labeled the cradle of civilization, can without exaggeration also be titled the cradle of Christianity. It was in Antioch that followers of Jesus Christ were first called Christians by their Roman rulers, and the Armenians, Assyrians and Aramaic-speaking Suryanis of eastern Anatolia were among the first non-Jews to adopt the new religion. The Armenians, converted by St. Gregory the Illuminator, became the first nation to accept Christianity as the state religion. St. Paul, a native of Tarsus, took advantage of the excellent Roman road system to travel three times through southern and western Anatolia, preaching and converting as he went. He also lived for over two years at Ephesus. Many of his epistles are addressed to the peoples of Anatolia; the Cappadocians, the Ephesians, the Galatians, etc. John, Philip, Barnabus and Peter also proselytised in Anatolia. John’s Book of Revelation was written while in exile on the island of Patmos, and was addressed to the seven churches of Asia Minor — Laodicea (near Pamukkale), Sardis (east of Izmir), Philadelphia (Alasehir), Thyatira (Akhisar), Ephesus, Smyrna(Izmir), and Pergamum (Bergama). 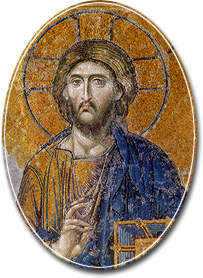 For two centuries the Roman authorities fought the rising spread of Christianity with persecution and terror. The turnabout came when Constantine the Great embraced Christianity and in 330 AD dedicated Constantinople the new capital of the Roman Empire, thus establishing the Eastern Roman or Byzantine Empire, which was to last for well over a thousand years until it was conquered by the Ottoman army. With the seat of Christianity located at Constantinople, believers set about stamping out all remaining traces of Paganism. Monasticism and ascetism emerged in the fourth and fifth centuries, and became very influential. In Antioch the anchorites demonstrated their piety by living on pillars, while the dendrites lived in trees. In 537, Justinian I built the cathedral of St. Sophia, an architectural masterpiece and the greatest legacy of the Byzantine Empire.

The early Church was plagued by deep-rooted doctrinal and theological disputes, the most contentious of which was the true nature of Jesus Christ; man, God or both at once. In an effort to solve these differences and define the doctrinal faith of the Christian Church, seven Ecumenical Councils were held. These Councils, convened by the Emperor, excited much public interest and speculation. The First Ecumenical Council took place in Nicaea (now Iznik) in 325 AD, and drew up a declaration of faith, the Nicaean Creed, which is still used today. At the second Council Emperor Theodosius declared Christianity the official religion of the Empire. Subsequent Councils, held in Ephesus and Constantinople, debated the doctrine of the Holy Trinity, the human versus the divine nature of Christ and the function of icons in worship. The fourth Council resolved that Christ was ‘truly God, truly man’ in one being, but the Armenian and Syrian Orthodox refused to accept this, stressing Christ’s single Godlike nature, and did not take part in subsequent Councils. In 1054 a schism took place between the Roman Catholic and Eastern Orthodox Churches which was both theological and political. Pope Leo IX and Patriarch Michael Cerularius excommunicated each other. These orders remained in effect until they were annulled in 1965.

In 1095 Pope Urban called for a holy war against the ‘infidel’ Selcuks who had taken Jerusalem in 1071, thus launching the Crusades; Christian wars with motives as much political and materialistic as spiritual. The first four Crusades were fought partly on the lands of Asia Minor. Following successful campaigns in Anatolia, the Crusaders built a chain of castles along the southwestern coast, the ruins of which can still be seen today. In 1204 the declining Constantinople was sacked by the Crusaders who ruled for sixty years before the Byzantines retook it.

The Catholic Community in Turkey dates back to the Crusades and to expatriate settlers who came since for diplomatic or commercial purposes. Similarly there have been small Protestant and Anglican Communities in Turkey since the nineteenth century.

Islam, which means submission to God, developed from the divine revelations made to the Prophet Muhammad (570-632 AD). Muhammad was born into the Kuraish tribe in Mecca and God’s revelations to him were recorded in the 114 suras (chapters) and 6,236 ayets (verses) of the Koran. It provides the basis for legal and judicial systems and prescribes a pattern of daily individual and community living. Supplementing the Koran is the Sunna, which developed from the traditions, moral sayings and parables of Muhammad (Hadis), and on which much of Islamic common law is based.

The nomadic Central Asian tribes were converted from the Shamanism of their ancestors to Islam by the Arabs of Persia. The Selcuks were responsible for converting large numbers of the native peoples of Anatolia. Today, although modern Turkey is a secular republic, Islam is the religion of 98% of the population of Turkey.

The main division in Islam is between Sunni and Shiite Muslims. The Shiites believe that Ali, Mohammed’s cousin and son-in-law, and his successors were divinely ordained caliphs. Although they believe in the Prophet Muhammad and the Koran, their religious practice varies substantially from that of the Sunnis. The majority of Muslims in Iran and Southern Iraq are Shiite. In Turkey, the majority are Sunni.

Religious Beliefs
Acceptance of monotheism is the most important facet of Islam. God is One; omnipresent and omnipotent, pervading all aspects of life. Muhammad stressed God’s everlastingness, as well as his loving, bountiful and forgiving nature. God had ninety nine names, reflecting his many attributes.

On the Day of Judgement each individual’s faith and deeds will be weighed and one will either enter paradise – a beautiful garden full of heavenly food, drink and beautiful women – or be cast into the fires of hell along with the faithless and the greedy. Martyrs for the faith do not wait for Judgement Day but enter paradise immediately.

Heaven and earth are populated with invisible spirits known as jinn, who serve as God’s messengers and record one’s deeds. Rebellious jinn are devils, who seduce people into evil ways.

Muslims believe that God sent many human messengers to teach the world His ways, including Adam, Noah, Abraham, Moses and Jesus. Muhammad was the last and greatest of these.

Religious Duties
These duties are termed the five pillars of Islam. The first is to profess the Kelime-i Sehadet, the Muslim creed of belief: “There is no god but God, and Muhammad is his prophet”. The second is prayer in the direction of Mecca (namaz). Five times each day the muezzin issues the Call to Prayer (ezan) from the minaret of every mosque with the words Allahuekber, or God is incomparable. The third is alms (zekat); every Muslim is expected to give generously of his earnings. The fourth
requirement is fasting from sunrise to sunset for the holy month of Ramazan (oruc), and fifth is the pilgrimage (hac) to Mecca at least once in a lifetime.

Almost one third of Turkey’s population belongs to a liberal Shiite sect known as the Alevis. In this order, men and women gather together in their place of worship, called a Cem evi, and during prayer face each other rather than Mecca, using Turkish rather than Arabic. They fast for three days in Muharrem instead of for the month of Ramazan.

Sufism
Within Islam, particularly from the eight century onwards, there was a strong ascetic, mystic movement, known as Sufism. This was made up of religious communities or brotherhoods (tarikat), usually founded by a charismatic sufi or dervish and led by a sheik. The rituals of such brotherhoods were strongly influenced by pre-Islamic and eastern occult practices and beliefs. These mystics desired to know, love and be in complete union with God. They were largely responsible for the early spread and popularization of Islam. Under the Ottomans they lived in tekkes or lodges, which were similar in nature to monasteries, and lived off alms. Two important Sufi brotherhoods were founded in Turkey.

The Bektasi order of dervishes was founded in the 13th century by a philosopher named Haci Bektas Veli (1209 – 1271). Their annual feast day is held on the fourteenth of August in Hacibektas, near Kayseri, and is attended by hundreds of thousands from all over Turkey. Accepting Ali as the legitimate imam (leader) this sect appeals to Alevis. It is a liberal, tolerant sect among whose unorthodox practices are allowing the drinking of wine and women leaving the house uncovered –
Haci Bektas pronounced that “a nation which does not educate its women cannot progress”. Bektasi dervishes were largely responsible for the conversion of the Christian inhabitants of Anatolia to Islam. The Ottoman Janissary Corp, Christian converts and the most powerful soldiers in the Ottoman Empire, were mostly Bektasi. When they became too powerful, both the order and the janissaries were abolished in 1826. The order revived at the turn of the century only to be banned along with other orders by Ataturk in 1925. 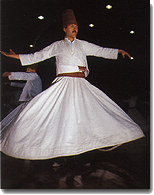 Founded in Konya by the mystic and poet Mevlana Celaleddin Rumi (1207 – 1273) this sect influenced Islamic thought throughout the Middle East. Rumi was an accomplished poet whose long work of poetry The Masnawi is regarded as a masterpiece of Persian literature. It is often called the Divan of Shams-i-Tabriz after the wandering dervish who was Rumi’s inspiration and spiritual companion. During the Mevlana service, known as a sema, the dervishes wear a full-length white flowing gown, which swirls as they perform their distinctive whirling dance, accompanied by the plaintive strains of the ney. December 17th, the anniversary of Mevlana’s death, is especially celebrated. Although they were closed by Ataturk, they continue to perform the sema on special days, and their tekkes are designated folkloric venues, where foreigners are welcome to come and watch. Especially recommended is Fatih Tekke in Istanbul, where the sema is performed every Monday.