The finest examples of Byzantine mosaics that have remained to the present day are the ones found in the Chora Monastery. This building was used for a time as a mosque and was known as the Kariye Camisi. Following the Second World War the building was repaired and restored and opened as a museum. The walls and the domes of this structure are ornamented with mosaics. These pictures are very alive and they portray the lives of Jesus and Mary, the death of Mary. The fresco of the Last Judgement belonging to this church is on exhibit at the Hagia Sophia.

Most of the churches and monasteries of the Byzantine period were converted to mosques and this fact has actually helped these structure to survive for 1200-1500 years as they were thus kept in a state of repair. 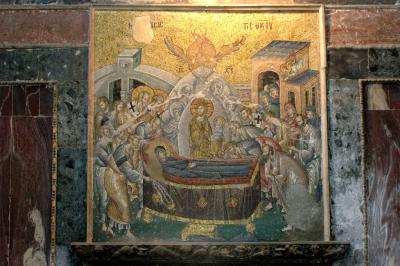 Death of the Virgin Mary
Photo By Dick Osseman