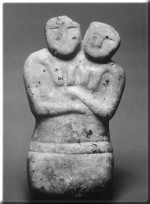 This period reveals a new step in the history of mankind with the development of the established and settled societies and production of food. Anatolia once again gives the most comprehensive sites in the world for this age with Cayonu, Hacilar, Catalhoyuk and Koskhoyuk excavation sites.

The Cayonu settlement which is not far from the city of Diyarbakir has been unearthed by the expedition teams under the leadership of Cambel, Braidwood, Mehmet Ozdogan, Wulf Schirmen and it is dated back to 7250-6750 BC. In the middle of the settlement is a center and around it are monumental, rectangular structures and houses. The foundation of the structures is stone and above is sun-dried brick. The inhabitants of Cayonu are the first farmers of Anatolia. They raised sheep and goat, and domesticated dog. The woman figurines among the finds discovered are the earliest traces of the Mother Goddess cult.

The Hacilar Settlement, brought to the daylight by James Mellart, located on the 25 km southwest of Burdur, is dated back to 5700-5600 BC. The walls and the floors of Hacilar houses which are made of mud-brick on stone foundations are lime mortared and red painted. Wooden poles for supporting flat roofs and ladders to suggest that some structures had two stories are discovered. In every house, there are goddess figurines made of clay, in standing and sitting postures. Different from other settlement areas, the dead are buried outside the cities. The pottery in Hacilar is well fired and comes in red, brown and yellow colors.

The Catalhoyuk settlement, on the 52 km southeast of Konya and north of the town of Cumra is, dated back to 6800-5000 BC and it is the most developed center of the Near East and the Aegean. The excavations have shown that the city with ten different settlement levels was built according to a designed plan. This is achieved by arranging the rectangular planned houses next to one another around the courtyards. There are no stone foundations in Catalhoyuk and all the houses carry flat roofs. Houses were made up of mud brick and they all were built according to the same ground plan. They have no doors. Instead the entrance to them is through windows on the ceilings by using portable ladders. The windows for air and light are placed on the topmost part of the walls near the roofs. The houses are composed of wide living rooms, storage rooms and kitchens. In the rooms there are seats and furnaces. The dead are buried under the seats in the houses after having been dried in the sun.The walls of the houses are decorated with bull heads and paintings. These paintings which signify the rituality in the community are placed in a corner in the houses rather than in a special separate location within the settlement area. Bull heads are formed in high reliefs, like statues, and some of them are made by the covering of original bullheads with clay. In the formation of the wall paintings, red, brown, black, white and pink dies on top of the gray mud brick are used. Among the motifs used are geometrical designs, flowers, stars, circles and in some parts depictions of life as well as human hands, deities, human figures, hunting scenes, bulls, birds, vultures, leopards, wild deer and pigs, lions and bears. A depiction of the eruption of a volcanic mountain ( very likely, the Mount Hasan, near Cappadocia) is the oldest known scenery painting.

In Catalhoyuk, we can also trace the early stages of farming. This is also accompanied with the worship of the Mother Goddess along with the holy animal, the bull. The Mother Goddess stands for fertility and multiplication of man. In the excavations carried in Hacilar and Catalhoyuk, hundreds of Mother Goddess statutes have been found. She, with her sexual organs in exaggeration is almost always depicted nude and lies down in the postures of crouching, and specially in the process of birth-giving . The fact that similarly designed Mother Goddess statues could also be found in the Near Eastern and Aegean cultures signifies the existence of matriarchal societies in these regions in the same time periods. The Goddess Kybele comes into sight around the 7000 BC. ( Most of the finds from this period are on display in Ankara Museum of Anatolian Civilizations.

As for Koskhoyuk; during the excavations carried by Ugur Silistre in Koskhoyuk, near Nigde, ornate pottery pieces and statues have been discovered.